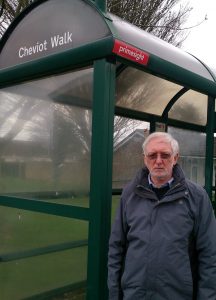 For over two years, a bus stop on Longfield Avenue has been without any service. Bus routes to the stop, known as ‘Cheviot Walk,’ ceased on 26 January 2014, leaving it abandoned. Fareham Labour Party blames the ghost bus stop on unnecessary cuts from the Conservative Government.

Longfield Avenue resident, Arthur Cooper (aged 90) said: “Since the bus has stopped running I’ve found it very difficult to get into town.”

Labour candidate for the Fareham South Ward, Richard Ryan said: “We need bus services which serve all residents. Some older people can’t walk very far to a stop into town and this might be their only form of transport.”

Fareham Council is currently seeking tenders to maintain the Borough’s bus stops. Richard continued “Although making sure bus stops are kept repaired, clean & tidy it would be a good idea to have buses to use the stops.”