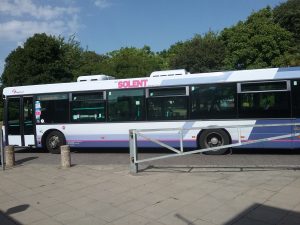 In a submission to the County’s consultation, Fareham Labour said the effect of these proposals on older and vulnerable people would be considerable. If a 50p single way charge was introduced it would mean in affect a £1 charge as most trips are return. If a charge was introduced there would be a real danger that over the years this cost would increase substantially. It would also increase traffic congestion and harm the environment as those with access to private transport would be more likely to use their own cars rather than pay a £1 fare.

To remove the use of bus passes for Taxishare, Dial-a-Ride and Call and Go services would mean a huge increase in transport costs for the very people who can least afford it. An increased fare for a single way Taxishare from £2.50 to £3.50 would mean an increase of £2.00 to £7.00 for a return trip. The same with Dial-a-Ride where an increase to an average of £4.50 would be devastating for many users.

Fareham Labour Party’s Chair Matt Randall said: “The rising cost of living continues to have disproportional effects on the most vulnerable in our society. After a life time of contributing to the local community it is a disgrace that the County Council would propose plans that would further increase the social isolation of the older members in our communities for the sake of £4 million. A large amount of money that does not go directly to the local area but the balance sheet of privately owned bus companies. Nobody is winning from this punitive proposal.”